You need to be logged in to save products in your wishlist.

This is a cookie agreement request — you can customize it or disable in the backoffice: Modules / Module manager / AN Cookie Popup.

Oxbow Alfalfa Hay is a high-fiber legume hay with the same long-strand fiber found in grass hays, but with more protein, energy and calcium. This hay is perfect for young or lactating animals that need concentrated nutrition. The succulent taste stimulates the appetite of ill or post-surgical animals.

Share
Hurry up! Only 1 item(s) left in Stock!
clear

This is an approximate conversion table to help you find your size. If you have already purchased an item by our brand, we recommend you select the same size as indicated on its label.

Once an animal reaches adulthood or completes recovery, this nutritious forage should be replaced with a grass hay. Alfalfa Hay, mixed with any other Oxbow grass hay, creates a rich, flavorful and nutritious treat.

Alfalfa Hay should only be offered carefully to mature rabbits, guinea pigs,chinchillas, and prairie dogs due to the higher protein and calcium content.
Many vets believe that animals prone to kidney stones, bladder stones or calcium crystals in their urine should always avoid alfalfa.

How much do I feed daily?

Alfalfa Hay can be fed daily to growing animals as 25% of their total dietary intake. Adult animals should be limited to a SMALL pinch as a treat. 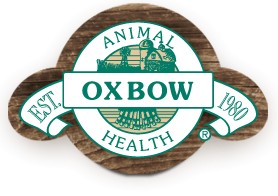 All rabbits need high fiber to keep their digestive systems...

Young rabbits need lots of fiber, as well as a good balance of...

Oxbow's Cavy Cuisine - Adult Guinea Pig Food is made from...

Looking for a good, basic grass hay with high quality...

Price €5.97
chat Comments (0)
No customer reviews for the moment.

Are you sure that you want to report this comment?

Your report has been submitted and will be considered by a moderator.

error Your report cannot be sent

Your comment has been submitted and will be available once approved by a moderator.

error Your review cannot be sent

Oxbow Vitamin C is a hay-based supplement with high-fiber...

Without a little variety in any diet, mealtime can get boring....

Looking for a good, basic grass hay with high quality...

These new, extra broad mane plaiting bands are made of...